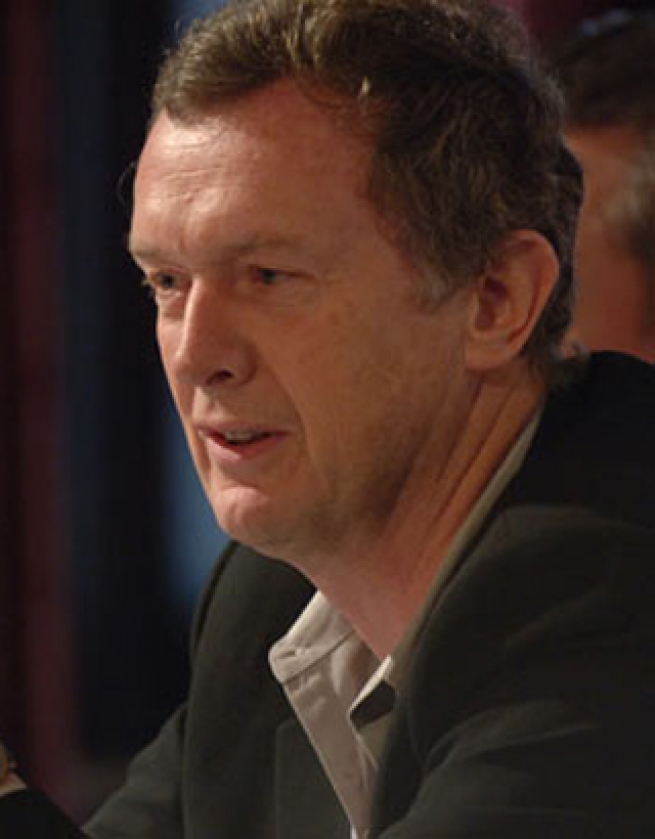 Stewart Purvis is the co-author of Guy Burgess: The Spy Who Knew Everyone, a biography of the Cambridge spy which was published in Autumn 2015.

Writing a spy biography is the latest chapter in Stewart's media career which began as a local radio reporter, a regional television presenter and a Sunday tabloid freelance while still at University. He was then chosen as one of the BBC's first three News Trainees in 1969.

He moved to ITN in 1972 where he went on to win Royal Television Society awards for news and documentaries, two BAFTA awards as Editor of Channel Four News and also collected a TV Times award and even an ‘Office Building of the Year’ award for ITN’s Norman Foster -designed headquarters in Grays Inn Road, London.

He became Editor-in-Chief of ITN and Chief Executive, and also President of the international news channel, EuroNews, based in Lyon, France. He helped to launch EuroNews into Russia as the country’s first news channel in Russian on terrestrial television.

After Stewart retired from ITN in 2003 he became a Visiting Professor of Broadcast Media at Oxford University and the first Professor of Television Journalism at City University London. He was on the panel set up by the BBC Governors to report on the BBC’s coverage of the Israel-Palestinian conflict. Stewart was also columnist for the Financial Times and the London Evening Standard

From 2007 to 2010 he was Ofcom’s Partner for Content and Standards, effectively the regulator of UK broadcast content, responsible for the implementation of the Ofcom Broadcast Code and other broadcasting regulation. He also chaired the UK Government’s Media Literacy Working Group and was one of the founders of the online academic resource Newsfilm Online.

Among the honours and awards he has received, in 2000 he was made a CBE for services to broadcast journalism, in 2005 he was made an Honorary Doctor of Law by Exeter University and in 2009 he received the Royal Television Society’s Gold Medal for an outstanding contribution to television. He has also been a Specialist Advisor to the House of Lords Select Committee on Communications. He is currently a non-executive director of Channel 4 and Chairman of the Royal Television Society's TV Journalism Awards. He will be moderating a session at the RTS conference in Cambridge in September 2015 and at the 2015 Edinburgh Television Festival.

His first book, co-written with Jeff Hulbert, When Reporters Cross the Line was based on a BBC radio programme of the same name.

One of Stewart’s specialisms is the British Royal Family. In 1981 he produced the ITN elements of ITV's coverage of the wedding of the Prince and Princess of Wales using pioneering digital effects. When the Prince and Princess took Prince William on their first overseas tour to Australia and New Zealand he travelled with a mobile documentary team sending back six weekly half hour programmes for transmission on Sunday afternoons on ITV. The programmes later won an award from TV Times.

In 1985 the royal couple subsequently granted ITN exclusive access which enabled him to produce ’The Prince and Princess of Wales Talking Personally’ on ITV which was one of the top ten most-watched programmes of 1985 and the two-part documentary ‘In Private, In Public’ which was watched by 18.45 million, putting it into the top five programmes of 1986. In December 1992 he broke the story of the separation of the Prince and Princess on the ITV Lunchtime News, before the announcement later that day by Prime Minister John Major.

In 1997 he was the Executive Producer of the first Queen's Christmas Broadcast made by ITN looking back on the year Princess Diana died.

During his career he has worked in more than 25 countries and has appeared as an expert witness before every media-related committee in the parliaments of the UK, France and the European Parliament.

He appears regularly on the Sky News Press Preview and comments on media matters across all broadcasters, both in the UK and the US. He has also given after-dinner speeches talking about his years as a programme maker and his dealings with 'Princes, Princesses, Popes and Prime Ministers'.