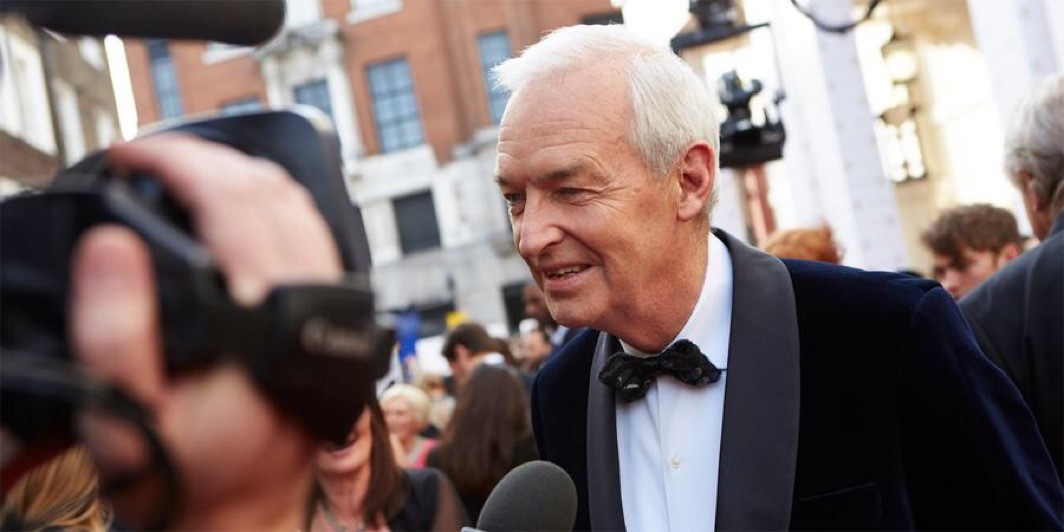 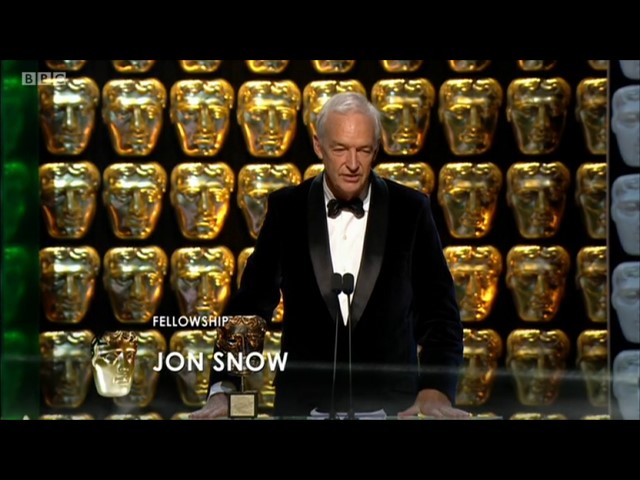 Jon Snow received one of the highest industry accolades on Sunday evening, a BAFTA fellowship. Here is what he said in acceptance:

The first time I ever saw a television was during the Coronation. We didn’t have one ourselves, very few people did have a television but there was one person in the village that had one and we were allowed to go and watch the Coronation on it. We entered his living room and there was this huge walnut cabinet with a tiny window in it and in the little window there were occasionally signs of a white hand or a wheel of a chariot or sometimes a gun or a busby but it was very difficult to know what was going on because it was snowing, even though it was June. It was a very very indistinct picture and I and my brothers sat on the sofa my father passed behind and said, “Television, it’ll never catch on!”

Well, the little window, I never dreamt I would look out of it myself but I began to and the window got bigger and bigger and bigger and it began to reach greater and greater number of platforms and inform cyperspace about content. We thought television news would die but it hasn’t. And what I never dreamt was that through that ever-enlarging window I would ever reach a point when BAFTA would give me a fellowship. I mean it’s unimaginable. I am a hack, and very proud to be a hack but that’s all I am. We’ve seen such talent pass before us tonight but I’m very proud to work in this industry and I want to thank BAFTA very warmly and very deeply for giving me this enormous honour. I mean it will strengthen my hand no end! “Don’t you say that to me mate, I got a BAFTA the other day and they’re pretty important you know, you wouldn’t say that to anyone without a BAFTA”. I am genuinely chuffed and I want to thank my family, my children Leila and Freya and their mother, I want to thank my cousin Peter Snow who taught me all I know and I want to think his son, Dan for being born because every time I go anywhere people say, “your son, isn’t he marvellous”. And just as I begin to say, “No actually he is my first cousin, once removed” I begin to see that I have lost the attention of the individual so now I just say, “I’m very proud of him”.

I want to thank the people that I work with. I want to thank Dorothy Byrne who has been my ultimate Channel 4 boss for longer than I can remember. We are as nothing as individual television journalists without the team we work with. I didn’t think that I and Coronation Street wold forge a bond tonight but we have. We’re both team operations and I am totally dependent on my cameraman or woman, my editors. We are nothing without them. It is a team effort and Channel 4 news has a glorious team led by my editor Ben de Pear.

I want to thank too, a special person in my life, my wife Precious Lunga and she’s kept me straight and got me rolling along. What I would say is this. We are living in the golden age of journalism. This is the best and finest time ever to be a journalist. You can speak truth to power because you can prove it as never before. We have access to information, we have access to transmission, and we on Channel 4 have access to something else. I’m going to thank one other person tonight. Probably the most unexpected person you’ve ever heard me thank in public, Margaret Thatcher.

Margaret Thatcher was on deck for the formation of Channel 4 and Channel 4 is very remarkable and different, as you've seen tonight. Cascades of BAFTAs and now we have one for Channel 4 News because that's who it's for, it's not for the me it's for the team I work with and I want to thank you all very much indeed, you at home who watch, and you here, and BAFTA especially. Thank you very much indeed.

Jon Snow will be hitting our screen’s on More4 with a brand new quiz show, Very Hard Questions! Starting on Wednesday 19th February with not one but two episodes, at 8pm and again at 10pm. From then on it will air every Wednesday at 8pm – not one to miss!
read more
Jon Snow delivered the prestigious MacTaggart lecture at Edinburgh’s International Television Festival yesterday. His inspiring and thought provoking speech was met with a standing ovation with many of the audience in tears and his comments have been widely reported across all national newspapers.…
read more
Congratulations to Jon Snow, Cathy Newman, Alex Thomson, Michael Crick and the rest of the Channel 4 News team who won an RTS award a the RTS Television Journalism Awards 2017 for Daily News Programme of the Year.
read more
Jon Snow presents live coverage of the athletes’ parade in Manchester as thousands of people take to the streets to celebrate those Olympians and Paralympians who made us proud this summer. Tune in for Rio 2016: The Superhumans Parade Live from 4pm on Channel 4.
read more
Congratulations to Jon Snow who received a BAFTA award at the BAFTA Television Awards 2016 as part of the Channel 4 news team for their coverage of the Paris attacks
read more
Congratulations to Jon Snow, part of the Channel 4 News team who have been nominated in the category of News Coverage in 2016 at BAFTA Television Awards 2016 for it's coverage of the Paris Massacre. The awards will take place on Sunday 8th May.
read more
Read more news...