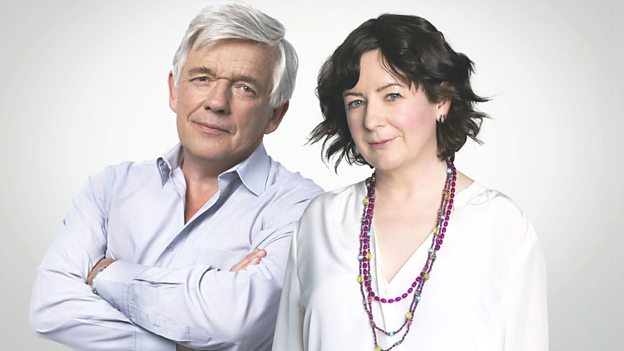 As the first ever voice on BBC Radio 5 live, Jane Garvey, and her former presenting partner Peter Allen will start their new show together on the network on Sunday 13 November at 7.30pm.

Jane and Peter will reunite for the new Sunday evening show, taking a typically wry and witty look at the week’s news. Their programme will feature interviews with the people who have made recent headlines, as well as those who are set to be centre stage in the week ahead.

The pair became one of the most popular double-acts on UK radio when they fronted 5 live Breakfast and 5 live Drive together for 13 years.

Jane and Peter’s new show will broadcast between 7.30pm and 10pm every Sunday. The pair won six Sony Awards during their last stint working together on 5 live.

Jane Garvey says: “Working with Peter for 5 live’s 20th anniversary reminded me of how annoying he is. And it brought home how much I’d missed working on the station I’ve never stopped listening to.”

Join Jane Garvey on Christmas Day for a special edition of the hit podcast Fortunately with Fi and Jane. This episode kicks off the regular airing of the podcast on BBC Radio 4. Jane will be presenting her last edition of Woman’s Hour on New Year’s Eve after 13 years of presenting the flagship…
read more
Congratulations to Greg Jenner, presenter of You’re Dead to Me and Jane Garvey, co-presenter of Fortunately...with Fi and Jane, both one of the top 5 most popular BBC Sounds podcasts of 2020. Listeners have downloaded record numbers of podcasts this year with Greg and Jane’s podcasts growing at a…
read more
Jane Garvey is leaving Radio 4’s Womans Hour programme after 13 years of presenting the show. Jane will be presenting a major new interview programme in the new year and the successful podcast that she presents with Fi Glover, Fortunately, will also be moving onto the Radio 4 schedule in 2021.Jane…
read more
This Sunday 8th March at the Lowry in Salford, Jane Garvey commences her Fortunately with Fi and Jane LIVE tour, along with co-host Fi Glover. Jane and Fi will be touring the UK. The rest of their tour dates are below as follows: - Wednesday 25th March 2020 – Chester Storyhouse- Sunday 26th April…
read more
We’re celebrating… Knight Ayton clients are covering the Royal Wedding all over the world. Keep an eye out for them all across the airwaves; Michael Buerk on Royal Recipes, BBC One, Monday to Friday at 3.45pm. Jennie Bond on Royal Wedding: Prince Harry & Meghan Markle, ABC Australia, Saturday 19th…
read more
Jane Garvey presents The Weekend Documentary: The Lost World of the Suffragettes as she listens to the fascinating recordings of British suffragettes on Sunday 25th February at 2pm on BBC World Service.
read more
Read more news...